This Slow Cooker Peach Cobbler Cake is a low-fuss, completely delicious, summer cake that is full of ripe peaches!

I have a few recipes on here that were born out of kitchen “accidents.”

My crispy Belgian Waffles, for example, came about after I forgot that I was halving a recipe (I do this a lot actually) and accidentally doubled the baking powder. Lo and behold, I ended up with the best waffles ever- crispy outside and almost impossibly light and fluffy on the inside. I never went back to the way that they were supposed to be. 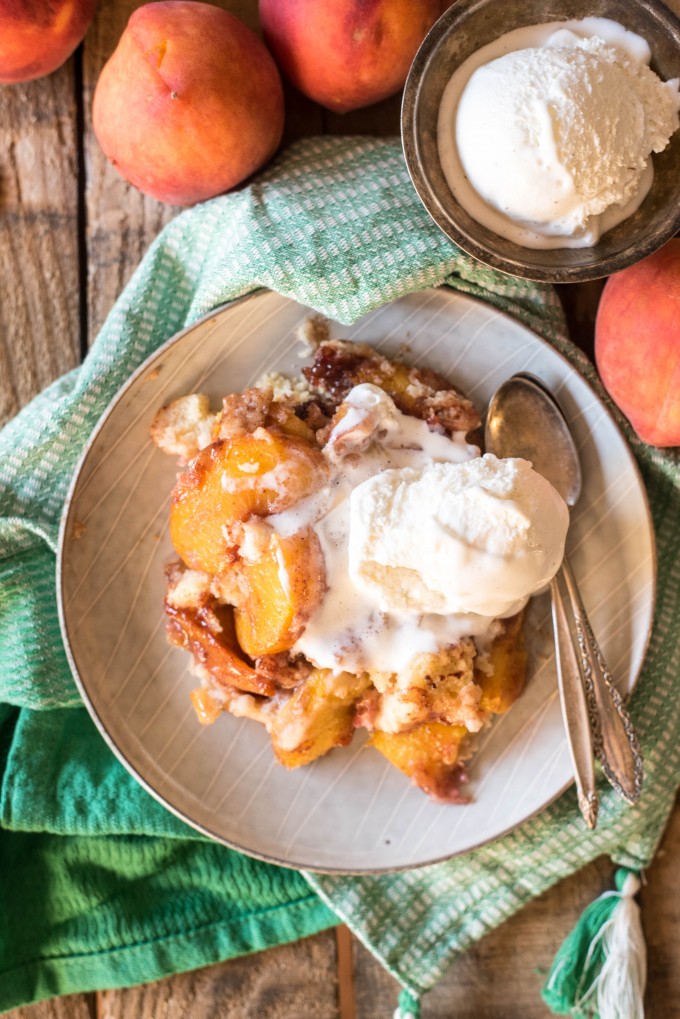 This recipe is sort of like that. I’m the first to admit that I’ve never quite “got” the concept or thinking behind baking in your slow cooker. I mean, wouldn’t it just be easier to turn on your oven and have it be done in like 1/3 of the time? What is the appeal?

However, judging from the popularity of such videos on Facebook, I could only draw one conclusion- that there was just something about it that I was missing. Rather than be left out of the loop, I decided to try it out.

I had just finished shooting a video for Grilled Bacon Wrapped Peaches with Basil and Balsamic, so I had a LOT of perfectly ripe, juicy, sweet peaches around. I’ve always been a sucker for a good cobbler, so I decided to try my hand at adapting my Blueberry Cobbler recipe for the slow cooker.

It was at this point that I realized that I didn’t have any baking soda. 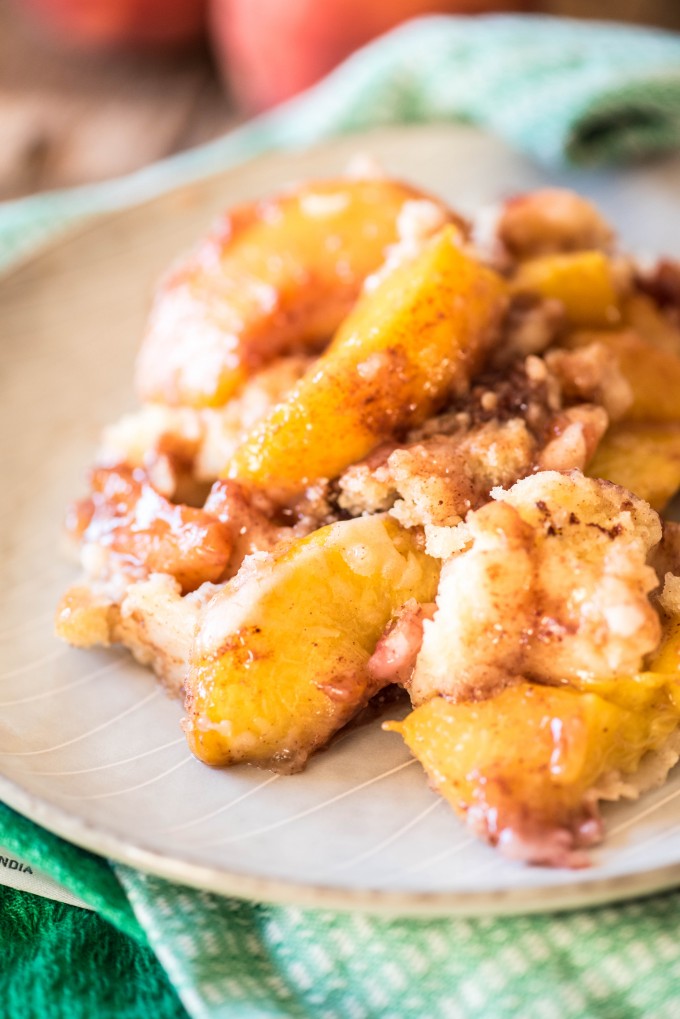 How this happened, I’m not 100% sure. I always have baking soda around; in fact, I usually have like a 10 pound bag of it from Sam’s Club (stuff is the best for cleaning up tough pet stains). However, I’m thinking in the move I threw it all away, figuring that it would just be easier to buy new fresh stuff when we got here.

A solid thought with poor execution.

So I decided to amend my cobbler recipe, adding an egg in lieu of the baking soda. I’ve done enough baking in my day to know that adding eggs typically makes things fluffier, and well, more cake- like, so I figured it would be a decent enough amendment. As I was mixing up the batter, I thought it seemed a little too thick, so I added more milk. 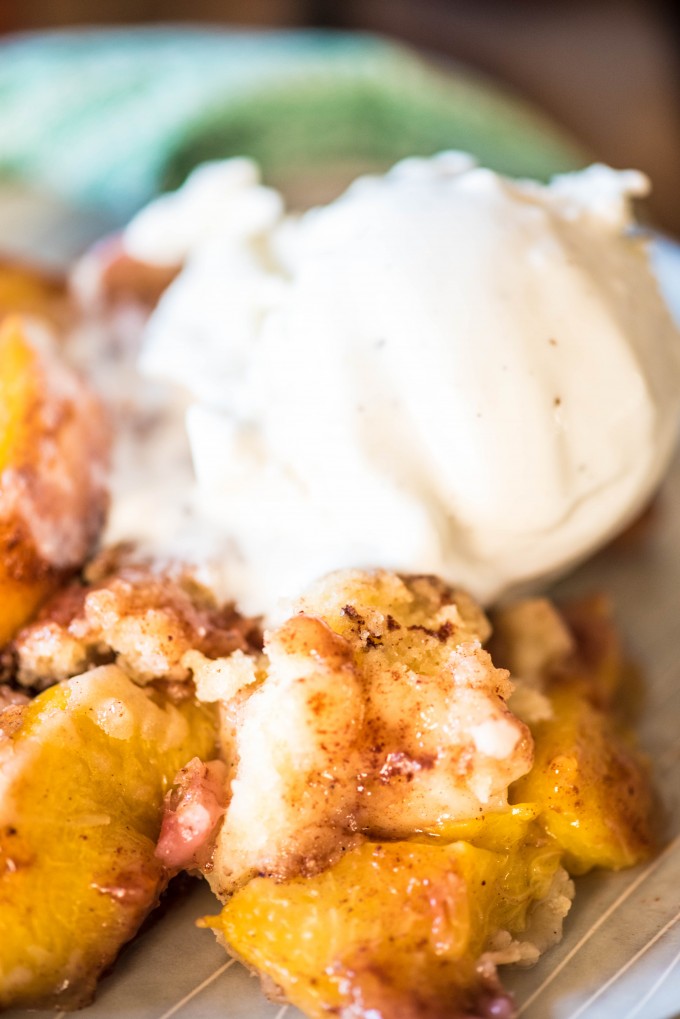 Here’s the deal- the addition of more milk is what turned this from a “cobbler” to a “cobbler cake.” I wasn’t quite sure what to expect using the slow cooker to bake, but I’m nearly 100% sure that I would have had cobbler instead of cake if I had not added this extra 1/4 cup of milk. So if you want to try your hand at a cobbler, I’d suggest reducing the milk by 1/4 cup. If you want to end up with a super delicious spoon cake, add the milk.

I can definitely see the appeal of baking in a slow cooker. Yes, it for sure takes longer and you don’t get the browning on top that you typically would with an oven, BUT my kitchen didn’t get hot from having the oven on in summer and it took like 10 minutes to throw together and it just seemed easy and low-maintence. The slow cooker automatically switched to WARM when the three hours were up, so it was piping hot whenever we got around to eating it that night. Definitely, definitely, definitely a repeater recipe. 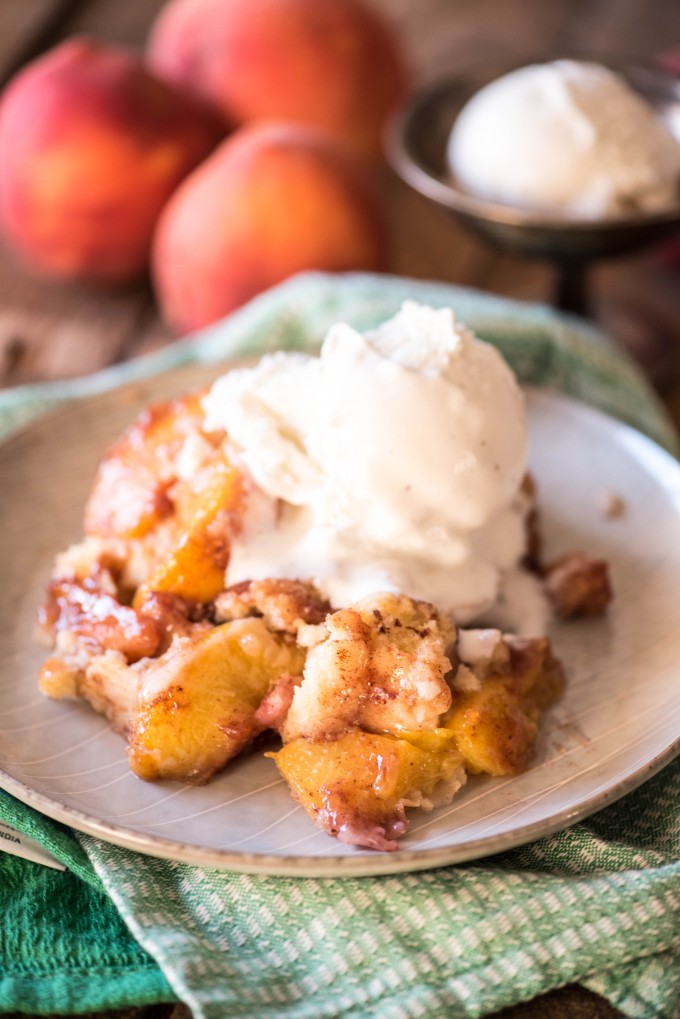 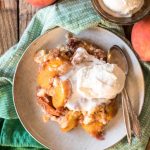