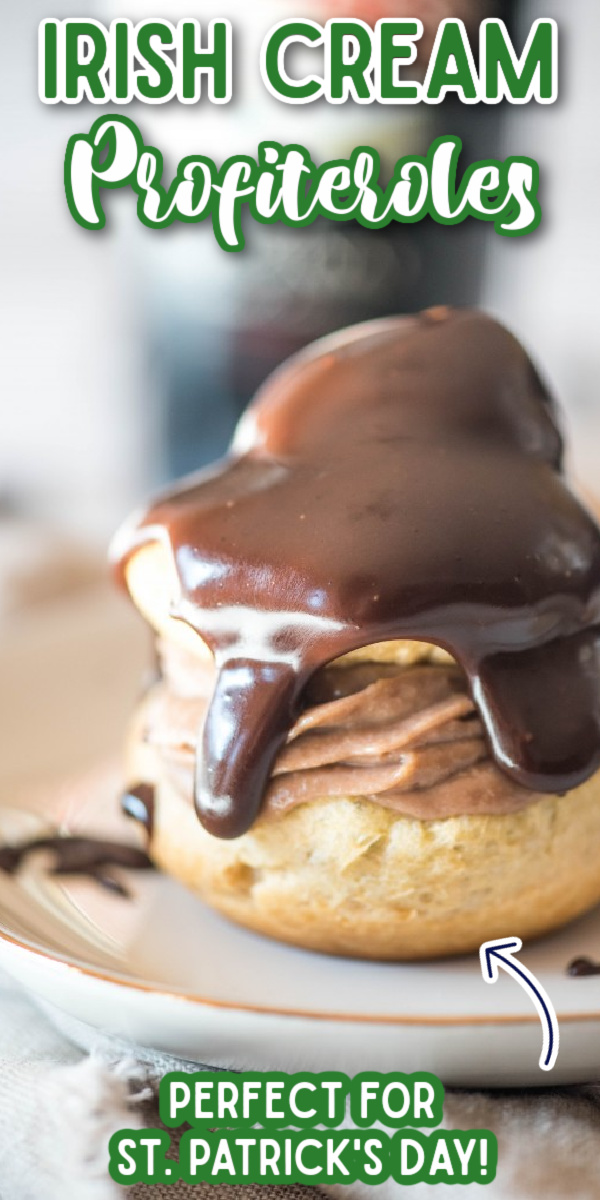 These Irish Cream  Profiteroles are piped full of a beautiful Bailey’s Irish Cream pastry cream and topped with an easy chocolate glaze. These cream puffs are the perfect St. Patrick’s Day dessert (but great all year round!)!

I am loving these Bailey’s Irish cream cream puffs more than I reasonably should.

I have a lot of truly wonderful friends, and each one fills some sort of special role in my life. My friendship with my friend Maureen (The Eclair Girl) is unique to all of my other friendships in that she is the only one that I can really talk about pastry with.

We ask each other questions, bitch when something doesn’t work, and trade recipes.  I got a text from her two days ago, with an ethereal picture of the most beautiful little chocolate topped creampuffs that I had ever seen, with the caption, “Irish Cream Profiteroles”!

Now, I’m not one to go bananas over writing posts for all the different holidays. I’ll do it to a degree, a cookie recipe here or there, maybe some recipes for Thanksgiving dinner, but I don’t devote a whole week or month to it – and lately it seems as though you can’t click anywhere on the Internet without seeing the recipe featuring Guinness or Bailey’s or Irish whiskey or the like.

I had no plans to make food or dessert in celebration of St. Packrick’s Day, or really celebrate it at all (somehow its just not as much fun after having a child. It’s all fun and games until you have to get up and be a parent at 7 am.)

However, once I saw those little puffball of delights filled with a beautiful Bailey’s pastry cream– I knew I had to get to work.

Made this yesterday and I have to say, they are probably in the top few dishes that I’ve ever made. They even evoked a “Wow, these are REALLY good!” out of Dave, who rarely remarks on things that I make anymore (as he says, “Everything is always good!”), so when I get a real, unprovoked accolade- THAT is really saying something.

These are made with pâte au choux, the same dough that we used for the gougères and the chocolate eclairs. It gets piped on the cookie sheet in slightly larger rounds, which bake up big, beautiful and hollow. Then get filled with the delicious Bailey’s cream and topped with chocolate ganache. I guarantee if you take these to your St. patties day party, you’ll be the other star of the show.

Note: this is not a dessert that will sit out well at room temperature for a while (more than 1-2 hours), the filling will melt slightly because of the Bailey’s. Still good, just not as fluffy. Best to store in the refrigerator (which you would have to do long-term anyway because of the cream).

Updated 3-5-18: I have changed the recipe a little from my original post- I no longer recommend making these with my Bailey’s cream. The whipped cream+ Bailey’s Irish cream was just too finicky to recommend to everyone.

In order to work, you have to freeze your bowl, have VERY cold, VERY fresh heavy whipping cream, and whip it to VERY stiff peaks. It’s actually an easier filling to make, but unless you do it right, you’ll end up with a soupy filling that doesn’t stand up prettily.

I suspect it has something to do with the addition of the Irish cream.

In lieu of the whipped cream filling, I ended up making more of an Irish cream/mousse filling. I used the filling from my eclairs as a base recipe, then whipped a cup of cream to lighten it up. It worked great!

If you like these Irish Cream Profiteroles, look at these: 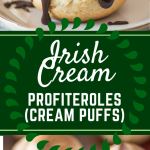