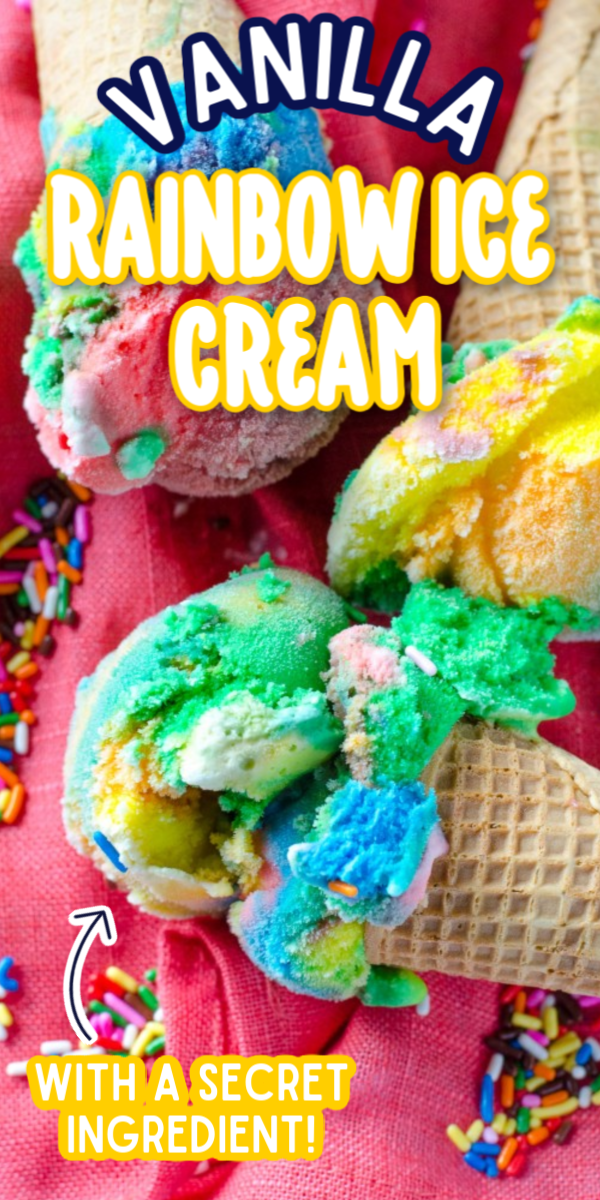 Have you ever wondered how to make rainbow ice cream? This Vanilla Rainbow Ice Cream recipe is super easy and fun to make! 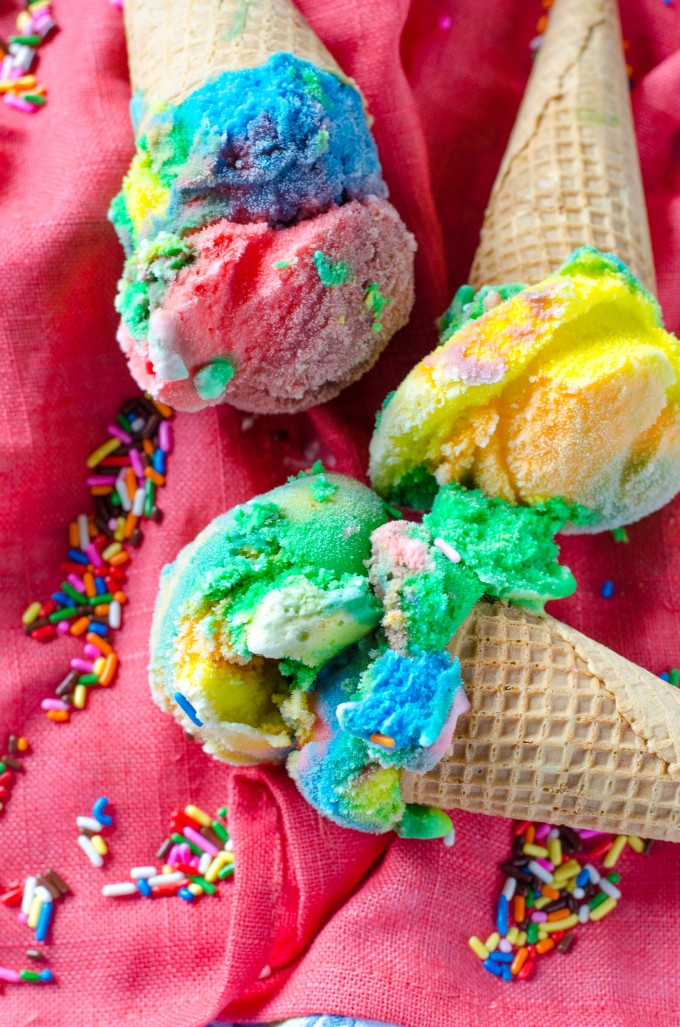 I need all the ice cream in the world right now. And wine. Ice cream and wine.

Michael has colic, which is as awful as everyone has ever made it sound, 100%. In fact, Father’s Day was so bad that I texted my mother and told her that a truck could have crashed into our house and the day wouldn’t have been worse. It would have just fit right in with the rest of the day.

So yeah. I need ice cream, and lots of it. Thank God for Ice Cream Week.

Vanilla ice cream has kind of a bad rap. It’s labeled as plain, even boring.

I can assure you that this vanilla ice cream is anything but boring. Just look at that rainbow ice cream!

The ice cream itself is delicious- and even better, its totally scoopable! I struggled for a long time with making homemade ice cream because of how hard it freezes. I’m not sure that even the Hulk could manage to scoop it. But add a minuscule amount of vodka to your ice cream base, and it is just enough to keep it from going all Elsa in Frozen on you. 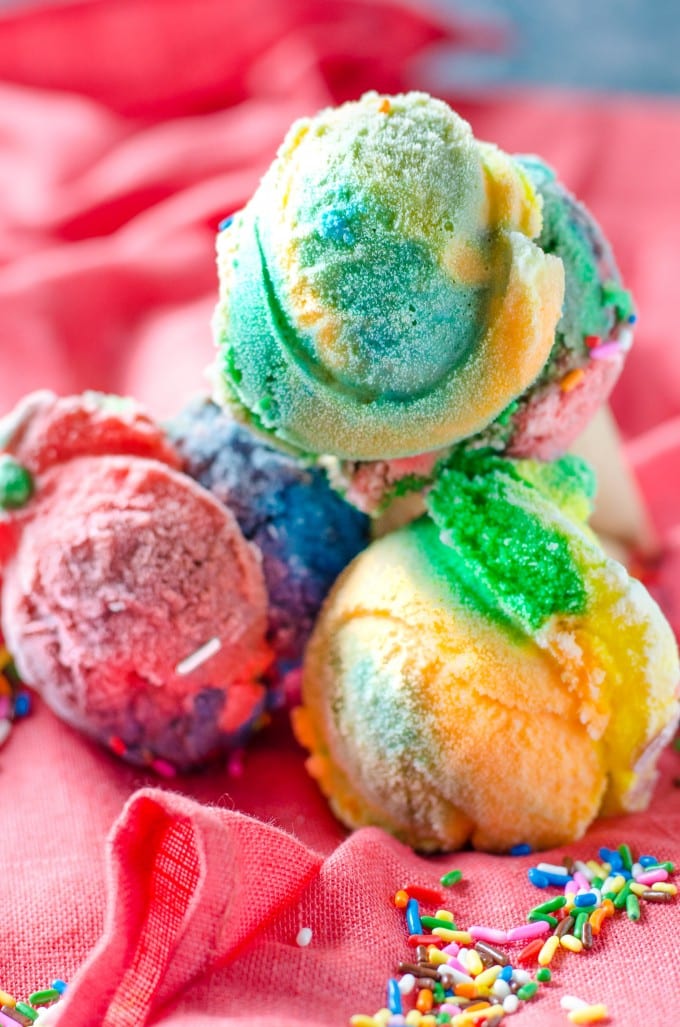 Normally, I’m not much of an ingredient snob, but in this case (since there weren’t going to be any other flavors) I really wanted to use a high quality vanilla. Rodelle actually sent me some to try and it was quite lovely. You can buy it via Amazon here

Now, lets talk about all this COLOR that we’ve got going on here. I had this idea weeks ago and had no clue if it was going to work. Full disclosure, it is obviously more work, but its minimal and I think it’s so worth it. What kid wouldn’t just die over this?

It was all I could do to keep Jonathan out while I was shooting it. I finally had to placate him with a plain ice cream cone. 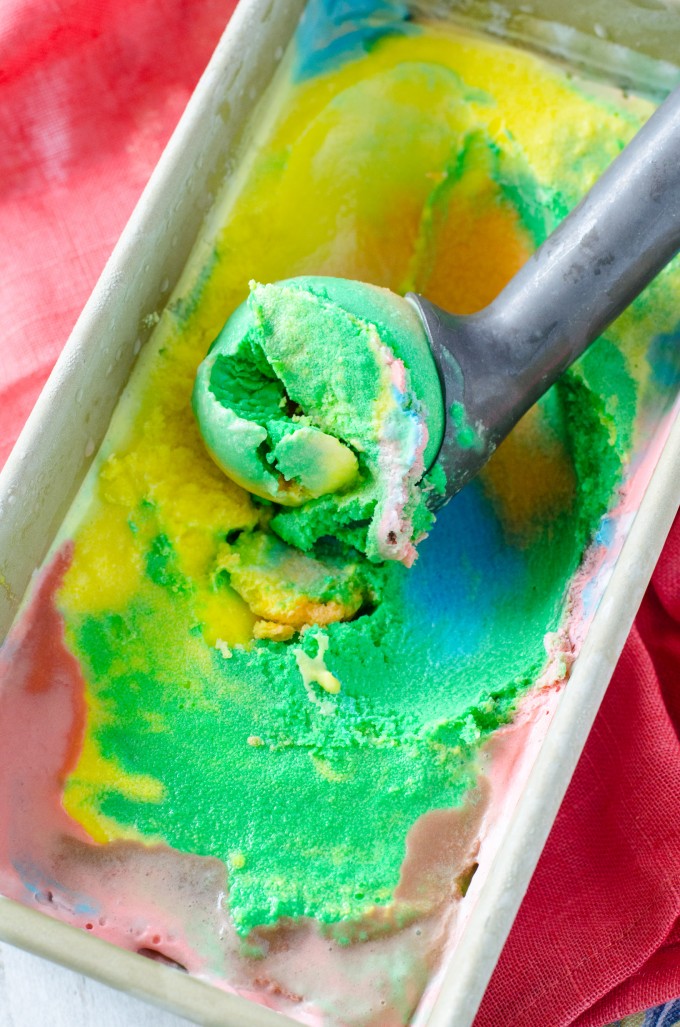 Doing the colors is simpler than you might expect- once your ice cream has become the consistency of whipped cream, you’ll divide it between bowls and use whatever colors you like. For the rainbow effect here, I used red, orange, yellow, green and blue.

The red and blue also combined in a few areas and gave me violet. Once I mixed up the colors, I put them back in the freezer to set up for a bit and get back to a whipped cream consistency.

Then I poured the colors in- red, blue and orange in the bottom of a loaf pan, then green and yellow across the top, as you can see in the pictures. The colors swirled together nicely, as you can see.

Make sure to add some whipped cream for clouds! And of course, don’t feel like you need to hold back on the rainbow sprinkles. 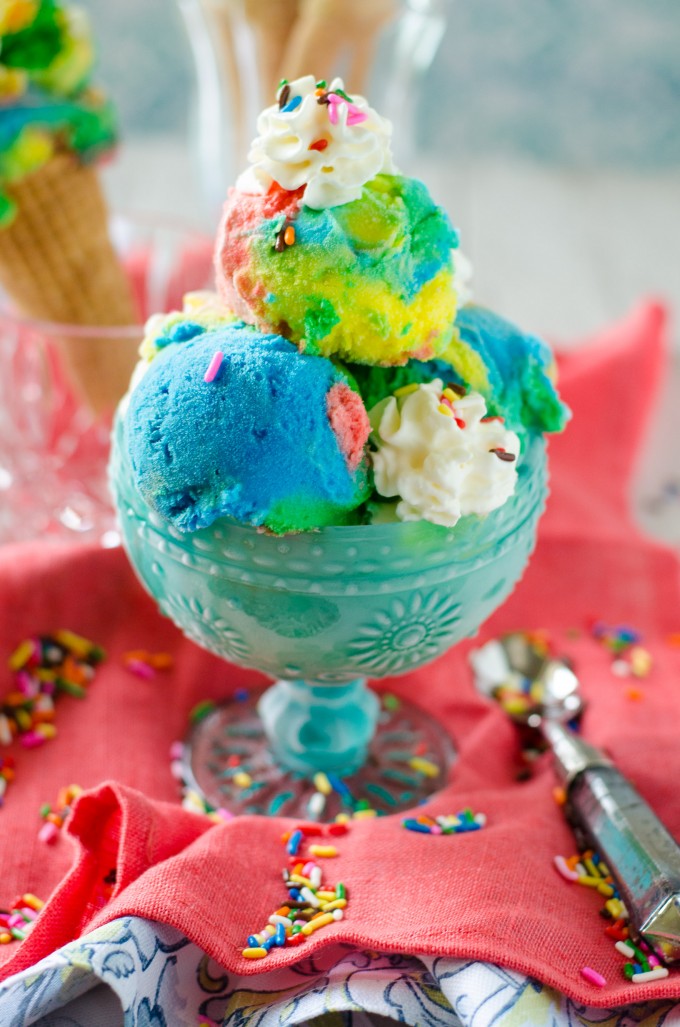 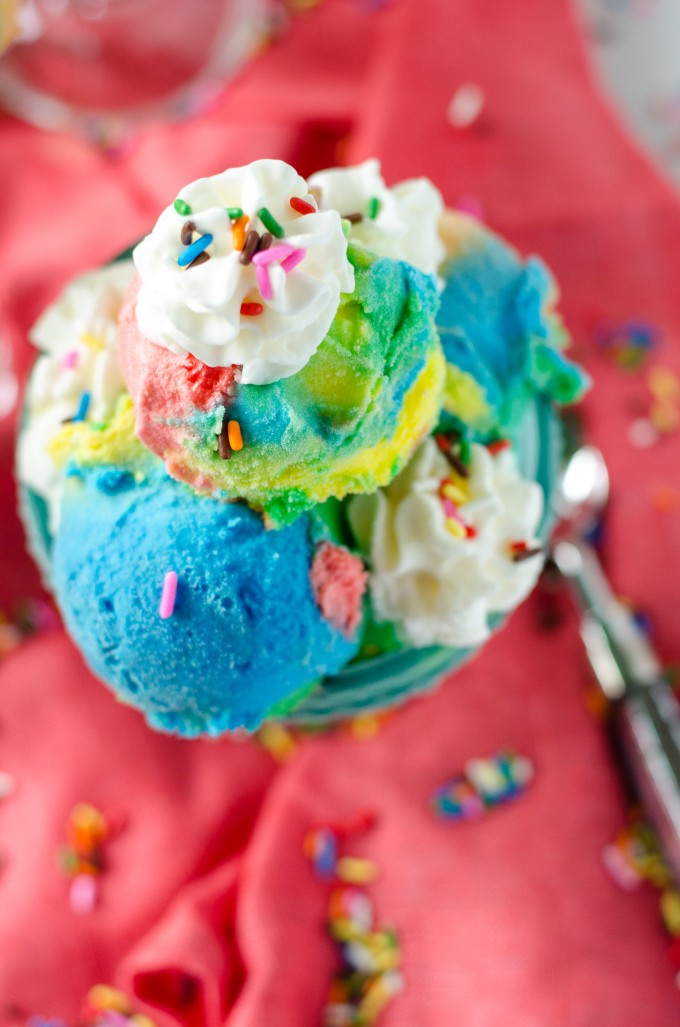 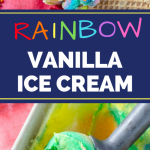 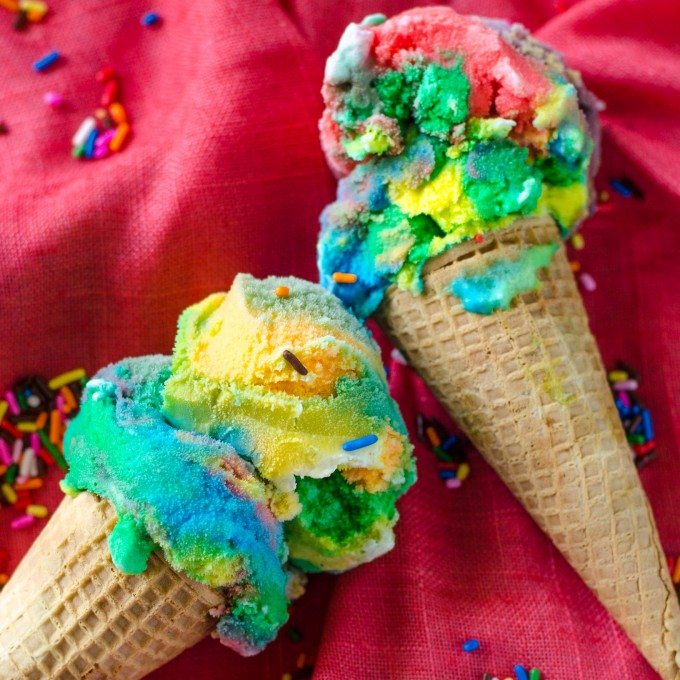 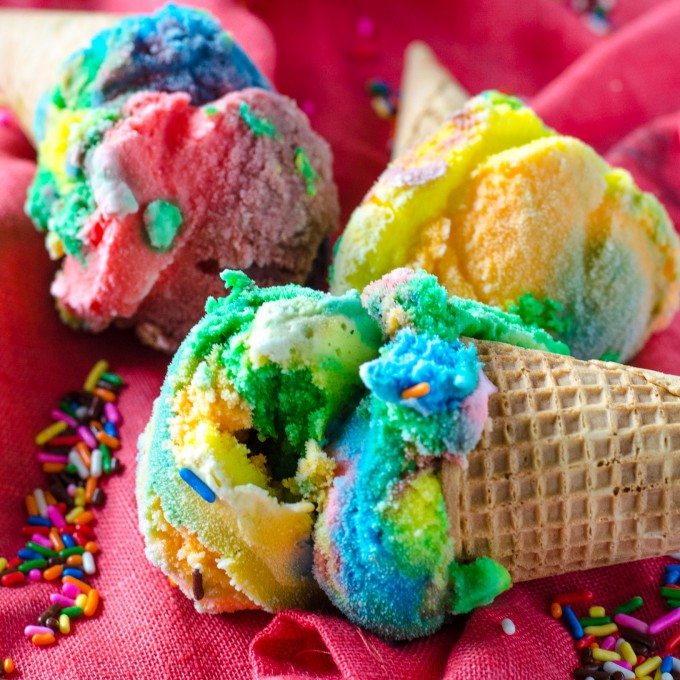 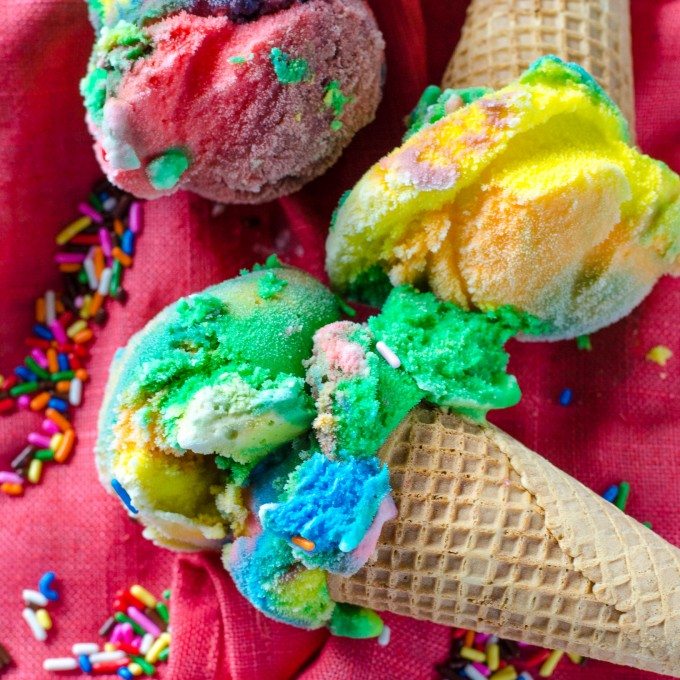 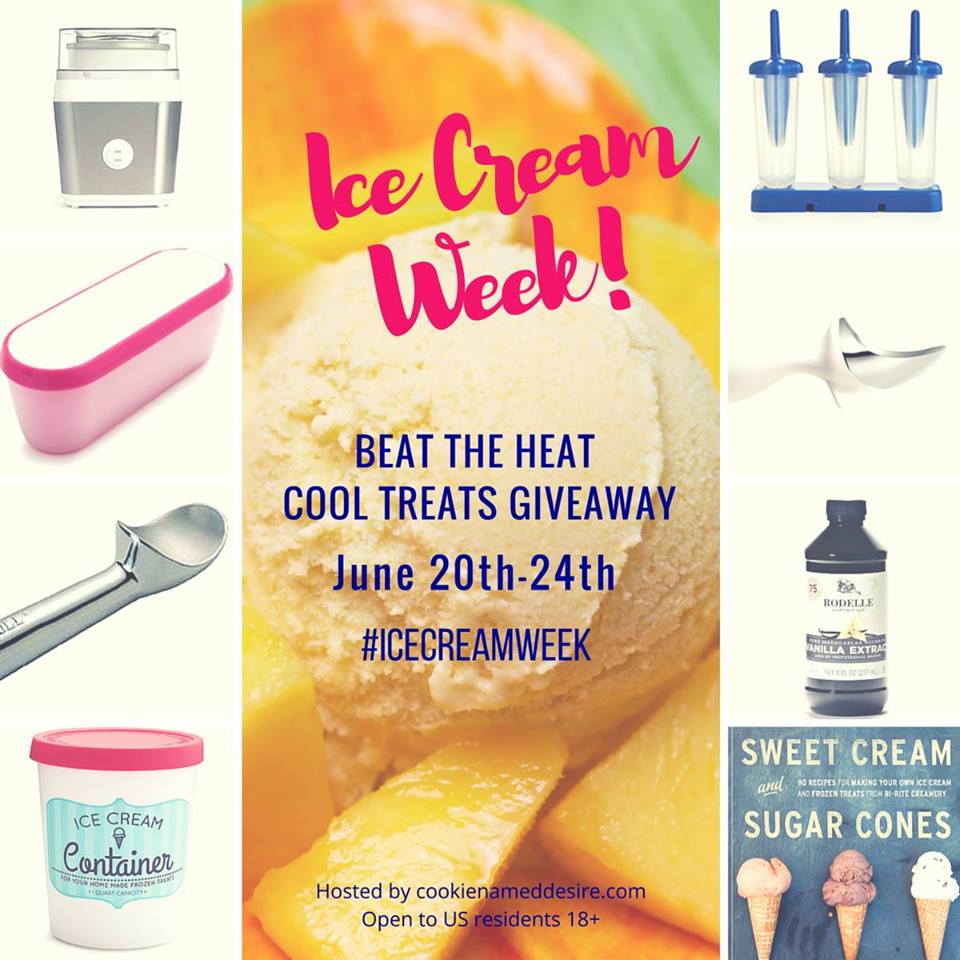 I’ve teamed up with a bunch of other fabulous bloggers to celebrate Ice Cream Week (#icecreamweek). As I’m sure you’ve guessed, they really had to twist my arm to participate. Lucky for you, I did- because we have an amazing giveaway for one lucky reader!

Make sure to check out all the other bloggers for #IceCreamWeek: