I watched my son eat a raw potato yesterday. Twice.

I’ll let that sink in.

I was talking with my mom on the phone yesterday morning, and I looked down and J had helped himself to a potato (washed, thankyouverymuch) out of the bin. I was so surprised that I couldn’t really do anything but laugh. He seemed to be kind of into it, and I figured that there were worse things that he could be eating/trying to eat, so I just let it ride. As my husband loves to tell me, “Potatoes have more potassium than bananas.” That’s his fun fact that he will spew out- it’s now a long-running joke in this house.

There. Now you know I’m not a liar. I made skirt steak fajitas for dinner, but I didn’t think that he’d be real into the bell peppers, so I made him a cheese quesadilla. He basically skipped nap time yesterday, which is a terrible abomination, so dinnertime was anything but relaxing. Squirming, pushing away from the table, throwing food to the dog, putting food straight into his bib, anything that was put into his mouth was taken back out and thrown on the table- you get the picture. I finally got annoyed and said,

“You know what, fine. Here’s your stupid potato!”

Whatever. I decided that bedtime was imminent at that point.

However, the fajitas were good! The skirt steak turned out really juicy and flavorful, albeit a little on the sweet side. I would probably cut the brown sugar in half and increase the red pepper flakes and cumin, just food for thought if that sounds good to you. 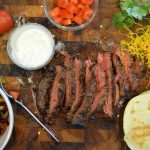