Home » Musings » It Was Quiet 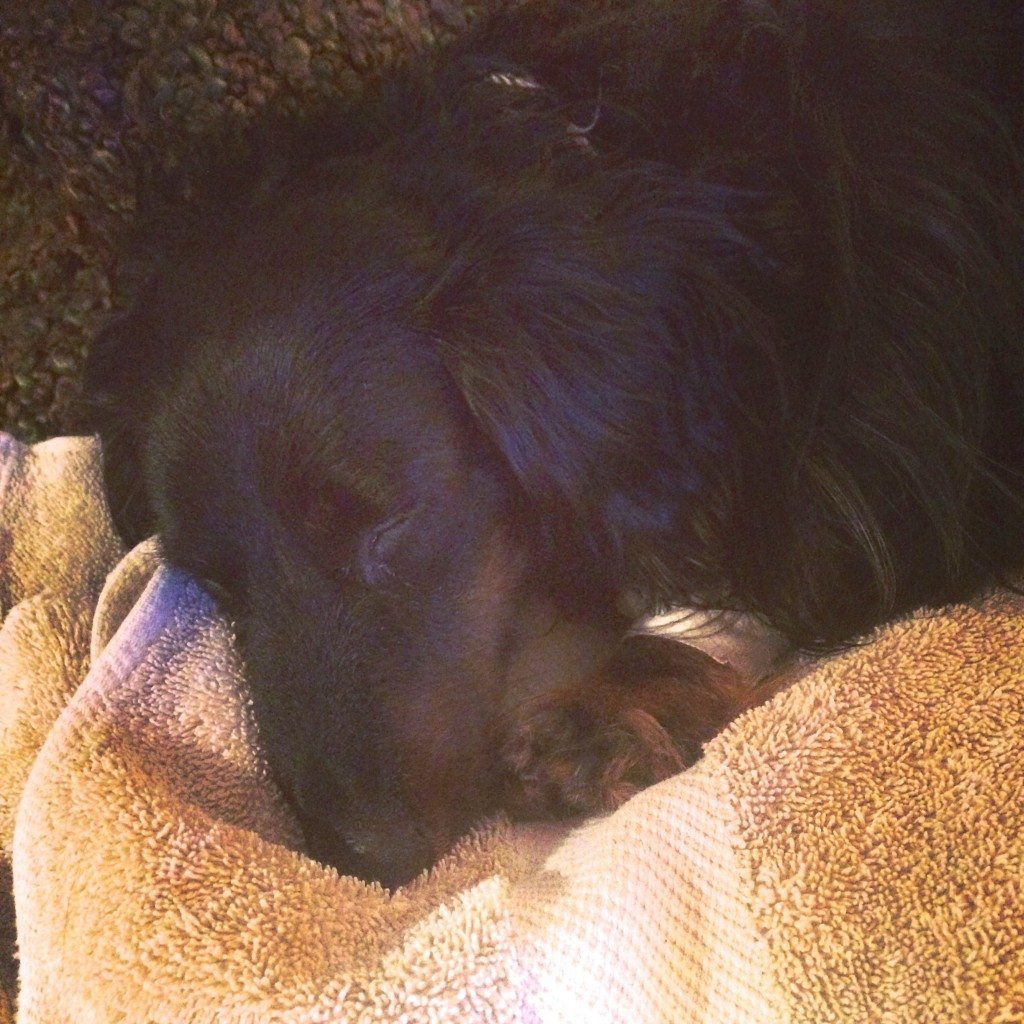 Tonight, when Domino’s delivery guy rang the doorbell, I instinctively braced for the flurry of scampering paws and barks that are always elicited when our home is “under attack.”

But it was quiet.

After dinner, I instinctively watched out for the dog stealing leftovers from Jonathan’s highchair and/or trying to lick the silverware in the dishwasher, hoping for a tasty treat.

But there was no one there.

It’s been a few days since I posted, but not without reason. First, I made my Friday at Five cocktail too late on Friday, and I chose to sit and enjoy it, rather than rush through photo editing and writing up the recipe. But I can promise that there is a beautiful drink coming your way on Friday.

The second reason is sadder.

Saturday night, I was making dinner when all of a sudden there was a loud yelp from my dachshund Rock, who was sitting on the floor next to Jonathan. I asked Dave what had happened, and he said that he wasn’t sure, he didn’t see either of them do anything.

I was chopping up carrots, and Rock is always underfoot while I am knife-wielding. He’s no fool- he knows that in all likelihood, something is dropping on the floor for him to “clean up.”

I dropped a carrot. He didn’t move.

I called him over, and seemed to be walking with a limp. He nosed at the carrot and then just laid down. I knelt down to rub his back,and I felt a quivering mass of muscle by his right leg. I immediately told Dave to come over and feel it. We both assumed it was a muscle spasm. Dave called him over to him with the promise of a treat. He walked over.

And by “walked,” I mean he “kind of walked.” He more limped with one back leg and dragged the other one.

I burst into tears. It was a truly awful sight.

We took turns that night massaging his leg, applying bags of frozen corn to reduce the swelling, and a heating pad to help relax the muscle. He even got to soak in our bathtub (he has now used it the same amount of times as I have.) We could feel the knot getting smaller, so we were hopeful that a good night of rest would help, although he was getting less inclined to move around as the night went on.

The night was brutal. The dog was uncomfortable and whining, which woke me up at least 3 different times, and then Jonathan woke up screaming from a nightmare in the very early morning. I elected to just crash on the couch and see if I could sleep out in the living room for an hour or so. I opened my eyes to  see Dave holding Rock with a somber look on his face.

He set Rock down, and he didn’t move. He stood him up and his back legs just collapsed; they were like rubber. He seemed totally paralyzed. I called the emergency vet, who said it sounded like he was having an issue with a disc in his back and to bring him in. In all likelihood, he would get some steroids and pain meds and recover.

I threw clothes on and rushed him in.

The vet came in quickly and started testing his reflexes, which were still good. Then he began pinching Rock’s toes with hemostats. He didn’t react.

He then told me that he had probably  suffered a ruptured disc, which was compressing his spinal cord and paralyzing him. He told me that unless I drove him to an emergency hospital an hour away for a $9,000 surgery, I was pretty much guaranteeing him to be paralyzed permanently.

I freaking lost it and burst into tears. I asked if there were medicines that we could use to start the healing process, I had done some research online and knew that disc injuries were commonly treated with steroids and pain killers. He said that there was a small chance that they could work, but strongly recommended that I take him to a specialist in Tampa.

I don’t think I need to tell you that a $9,000 surgery isn’t in my family’s financial plan. I called Dave, told him what the vet had told me and we both started to cry. It seemed as though Rock’s fate, at only 6 years old, was inevitable. We didn’t want him to suffer and be in pain, so we decided to give him a round of meds at the vet and bring him home while we figured out what to do next.

While I was waiting for the drugs to be administered through an IV, I called Dave and sobbed that I couldn’t believe this was happening. I wept and told my parents that I couldn’t imagine not having our little hot dog around. I told my sister-in-law that all I could think about were the days where he was trying desperately to jump on the couch just to be next to me, or standing under my legs being nothing but underfoot while I was cooking, and how I would yell at him to stop being annoying and leave me alone. I told her that I would do anything to have him be underfoot now, and those days were gone forever.

Four hours after I left and a bucket of tears later, I arrived back at home, lame dachshund in tow (against medical advice). We unloaded Rock onto the couch to rest, and he collapsed with a sigh and went to sleep. I posted on Facebook, asking if anyone had had this happen to their dogs before. I was slightly encouraged with the comments I got back- it seemed as though this was not something entirely uncommon, and it was possible to have dogs heal through medical management- that is, steroids, pain meds and muscle relaxers, coupled with 24/7 crate rest for weeks. We decided that it was worth a shot, and that I would still go see the specialist the next day.

The night was rough. Rock has slept in bed with us since the we caved the second week after we brought him home. Having to keep him in a crate was terrible for everyone. We thought it would be best to have his crate next to our bed in case he needed something that night. He whined. We couldn’t sleep. I moved him into my closet and closed the door. He whined louder and started barking. I figured this was not going to work, and took him to the guest room. I put the crate on the nightstand and got in bed. He still whined, but at a level I could sleep through.

I took him to the vet today. After examining him, she tested his reflexes, which seemed stronger than the day before. She started to test his deep pain reactions, and I have never willed a dog to act in anger more in my life. Unbelievably, he did react, he COULD feel something. I was so encouraged. The vet sat and talked with me about our options for a good half an hour. She said that because we reacted so fast and started him on steroids so quickly, some of his deep pain stimulus had returned. She told me he was now an excellent candidate for surgery and if it was her dog, thats what she would do. I asked her what his odds were now. She told me that she would now put his odds at recovery at 85%.

I was floored, and now utterly befuddled at what to do. We had written off surgery as being financially unattainable, but this surgery’s center had a somewhat reasonable cost (albeit not inexpensive by any means). I talked to Dave, who was in between consults at work. We got about 5 minutes of conversation in before he was paged. We talked about the positive prognosis for a surgical outcome combined with the high cost vs. the low cost of medical management with the longer recovery that was less guaranteed. We went back and forth, up and down, side to side over the issue. We got nowhere.  He told me to do what I thought was right, he wasn’t crazy about the financial stressor, but told me that if we proceeded with the conservative route, it didn’t work and Rock ended up paralyzed, with low quality of life and needing to be put down, we would never forgive ourselves. I consulted with my parents and my mother-in-law, who all said that they would do surgery if they were in my shoes.

I got off the phone, signed the papers, and they whisked him into the back.