So since I upgraded our produce co-op basket, we received like 12 bananas last week. Don’t get me wrong, Jonathan and David both like bananas… but boy, thats an awful lot of bananas. I was debating what to make with them, and thought maybe I would try my hand at banana pudding. I wanted it to be unique, so I initially just thought about caramelizing the bananas, just to spiff it up a bit (not that I would have any real idea about whether banana pudding NEEDS to be spiffed up, since I have never had it before). Then my girlfriend suggested I abandon the pudding altogether and make bananas foster. Eureka! Bananas foster pudding, yespleasethankyou. I saw a recipe on Food & Wine that also used a meringue topping, one of my favorite things ever, so I thought I would try that out too.

I thought this might be a nice time to try out something new- I have been wanting to make some short videos of certain recipes to accompany my posts. I think my first attempt went pretty well, although I have a short list of things that I want to try to fix next time. Overall, happy.

What do you think? Yes, worth the effort? No? I’d love some feedback. 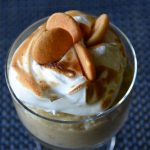