Dave has been joking with me about making tiramisu for the better part of a year, which about the length of time that the package of ladyfingers has been in our pantry. I bought them to keep tucked away as a “just in case” dessert, something that I could pull together if I ever just felt like it last minute. However, that also requires than i have mascarpone “tucked away,” and whipped cream “tucked away,” which never happens. When I unpacked them in the new house, I vowed that I was going to make tirasmiu, sooner rather than later, come hell or high water.

So I set out on Saturday late afternoon to do this. I read through the directions, and the directions said that it needed to sit in the fridge for five hours. That would put dessert time at 10 PM, and leave me no eggs for breakfast on Sunday.

So again, I delayed for a day.

So, The Great Tiramisu Project kicked off during naptime on Sunday, while I was arguing with DirectTV about why I thought it was unacceptable to charge me double for NFL Sunday Ticket this year vs. last year (I won, in case you were wondering). 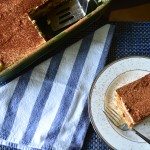