Home » Recipes » The Learning Tower: Get Your Kids in the Kitchen!

Every once in awhile, a product comes along that makes you go, “Now THAT’S smart.”

I had one of those moments about two years ago when I first saw The Learning Tower.

I was celebrating my friend’s daughter second birthday, when I saw this stand in her kitchen. I asked her what it was, and she explained it was called a “learning tower,” and it was a safer way to have her daughter in the kitchen with her. Jonathan was just getting to the point where he ALWAYS wanted to be in the kitchen and see what I was doing- which usually meant he was clamoring for me to pick him up and hold him (Please refer to my logo above for a picture of what that was like).

It’s not always super convenient to cook one handed.

The more I learned about it, the more amazed I was. Not only was it really nicely constructed of wood, with a  variety of finishes to choose from, it actually grew with your child. The platform had 4 adjustable height positions, so that you could raise and lower it as your children grew up, or younger children grew into it.  The platform even comes out completely, so you can slide one of their “playhouse kits” over it to turn it into a lemonade stand, ice cream shop, popcorn stand, or puppet theatre. Adorable, right?

So here I am, two years later, finally owning one and telling you guys how freaking awesome it is.

The biggest reason to own one of these is safety. When Jonathan was interested in helping in the kitchen, I was not at the point where I trusted him to stand on something high and not fall backwards or lose his balance. I honestly think that Michael could stand in this thing safely. The upper rails prevent kids from falling out the sides or back, especially when reaching for something.

It was a breeze to put together, even with Jonathan “helping” and Michael still being angry/colicky/refluxy. Whole thing took me less than thirty minutes. 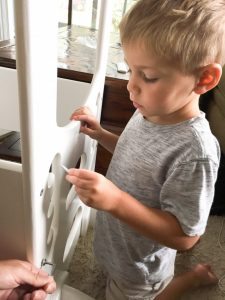 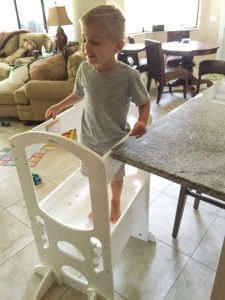 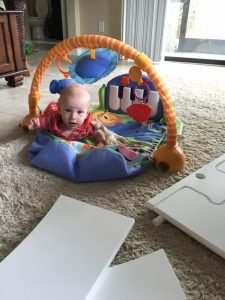 Jonathan still really likes to help me in the kitchen, which is great. The last few months have been a struggle for me in finding a good “work/mom/wife” balance. Work seems to be creeping in more and more, and slowly seeping into the time when my boys are awake, rather than me working furiously at 5 am, during nap time and long after everyone else has gone to bed. I have been feeling tremendously guilty about it lately, so it’s so nice to be able to include him in things, like putting sprinkles on a cake, pouring glaze, or (his personal favorite) sprinkling cheese. 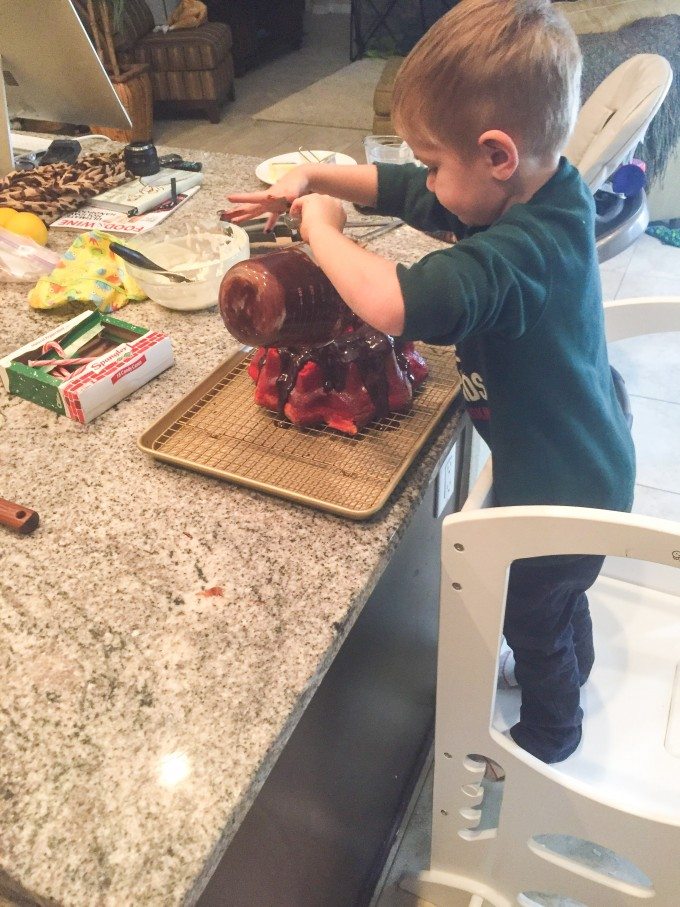 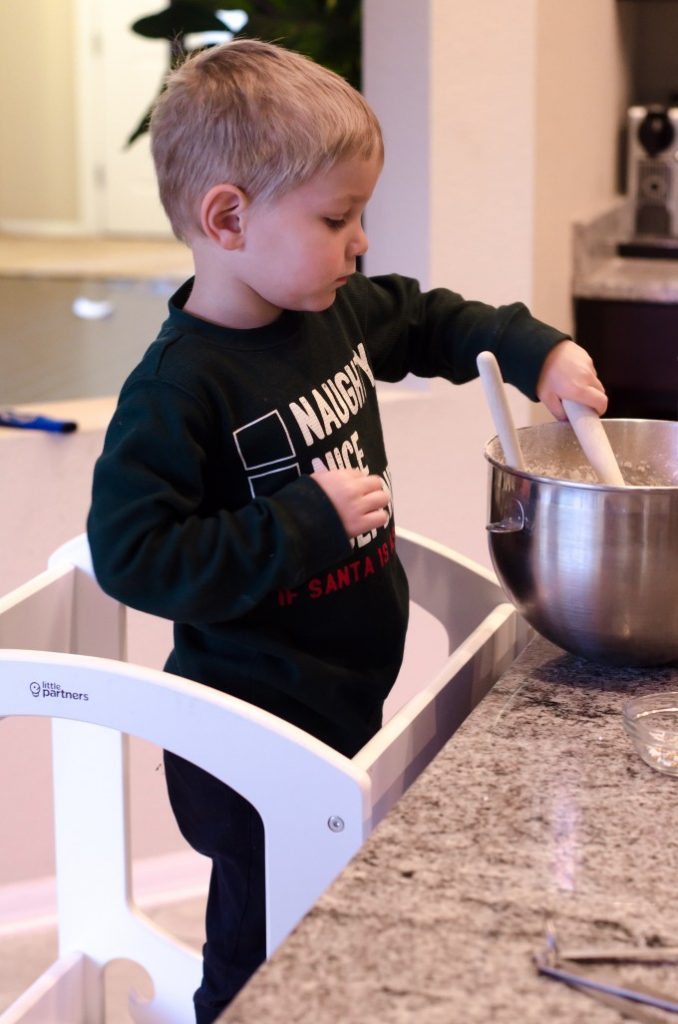 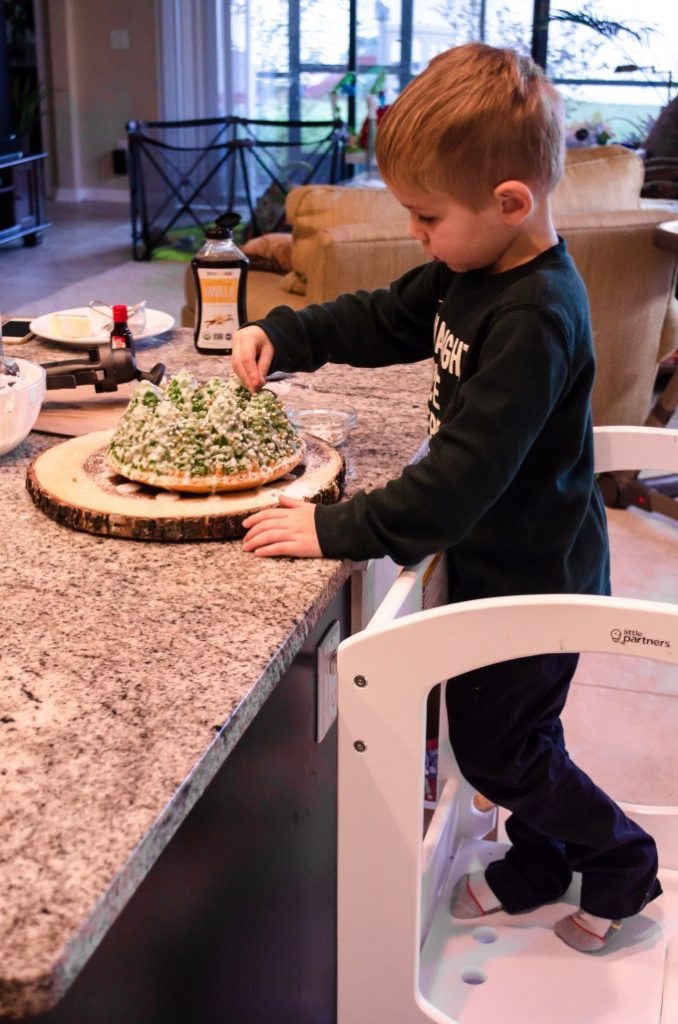 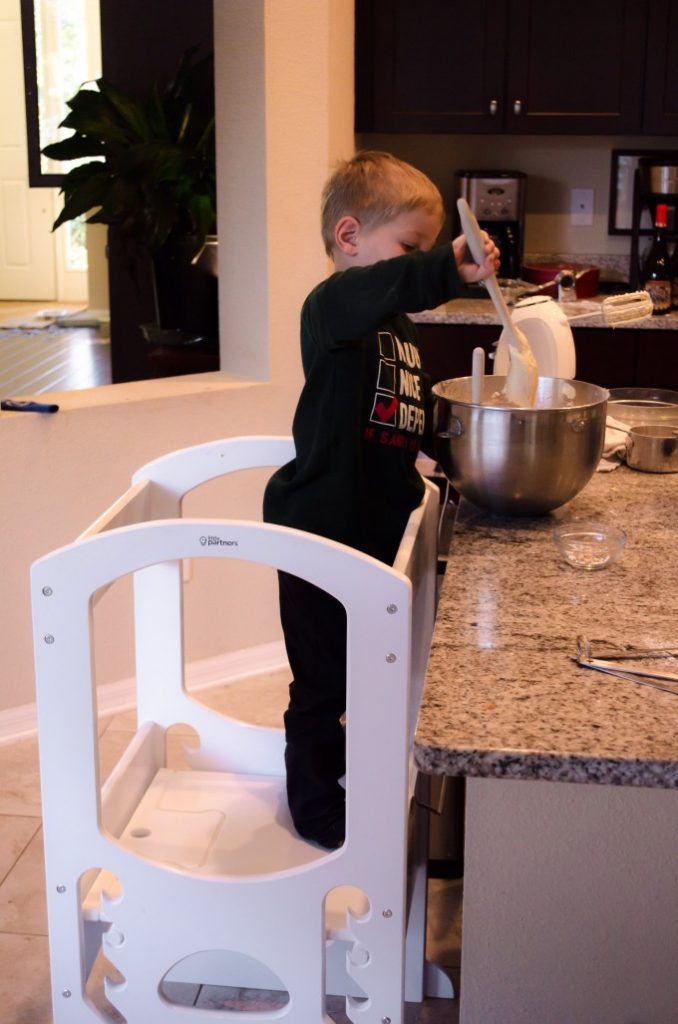 Jonathan had a friend over a few days ago, and we decided to let the kids make (well, decorate) a batch of spritz cookies. I can safely say that The Learning Tower safely fits a 3.5 year old and a 4 year old. Are they not the freaking cutest? 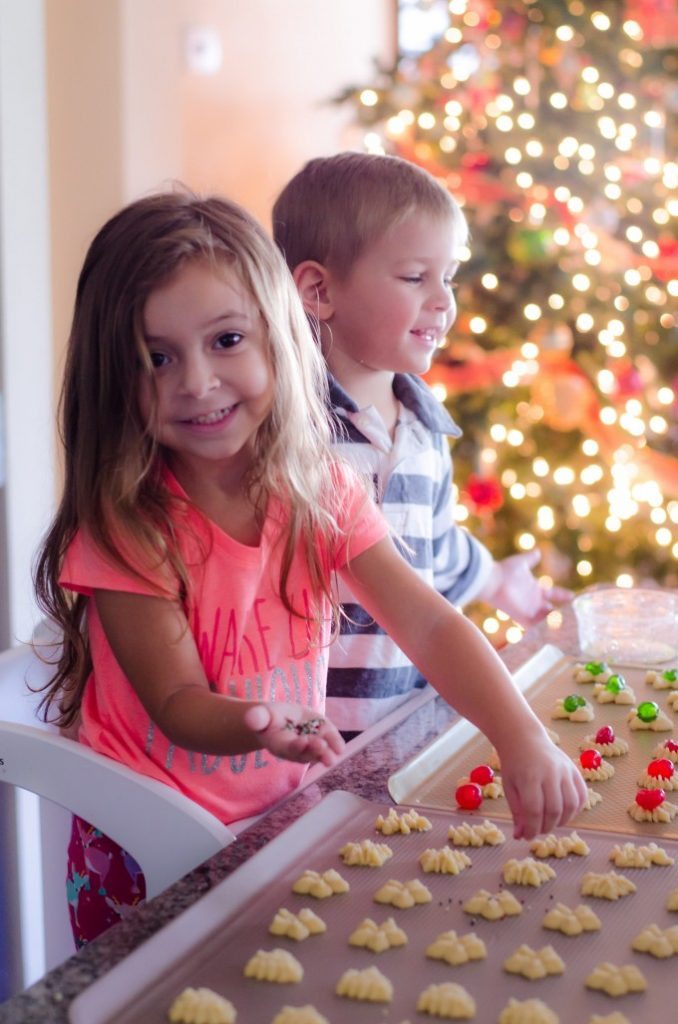 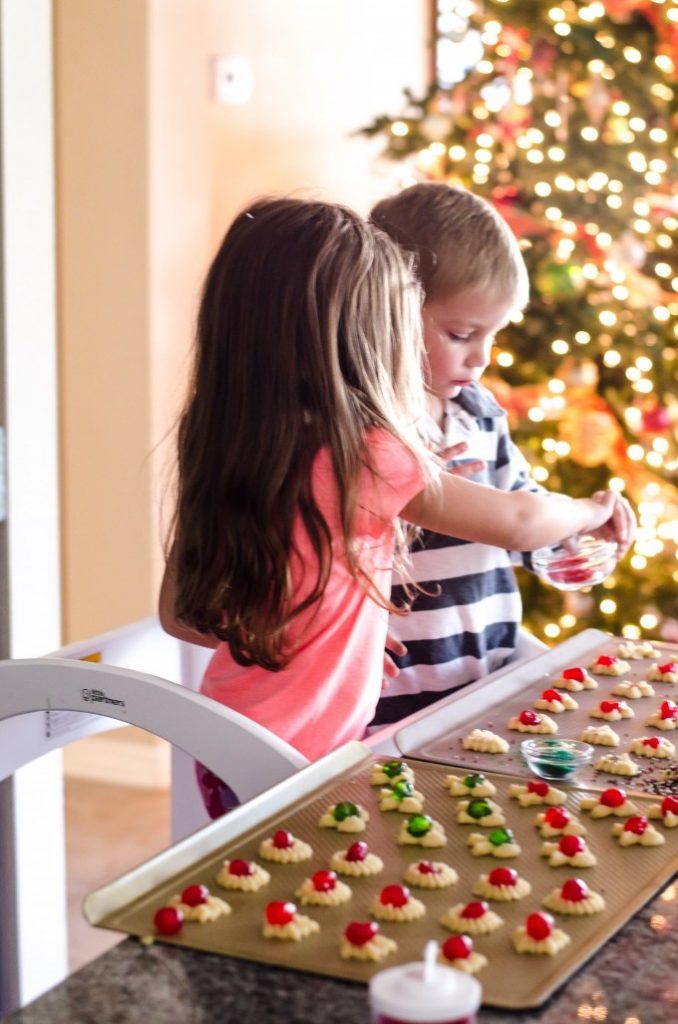 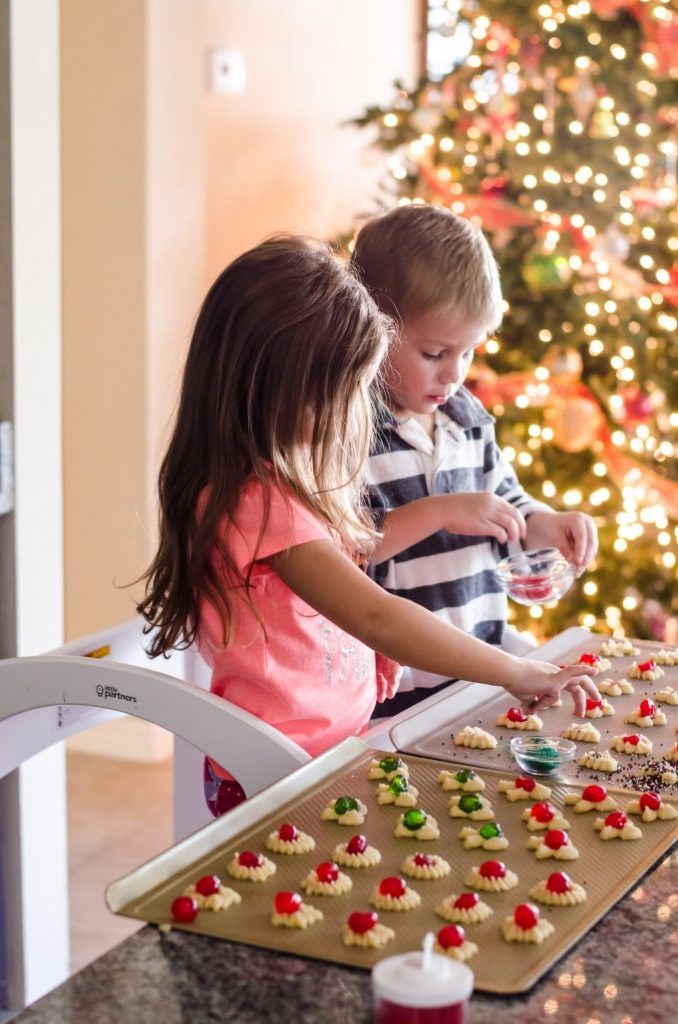 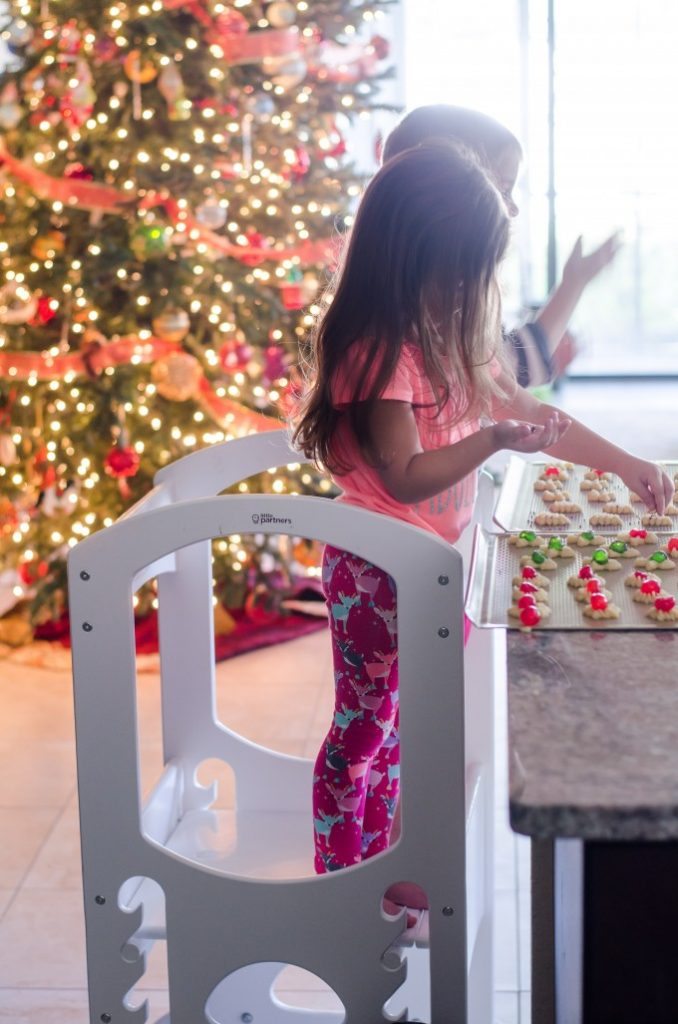 We also have the Tri-Sided Easel, which I know will be great when Michael is a little older and “sharing” becomes a more tenuous subject (not that it’s going so well now). This easel is large and sturdy, with three sides (duh)- chalkboard, white board and felt. The whiteboard side also has a place to put a roll of paper up for painting, and two bars to hold the paper in place while busy little artists get to work. Each side of the easel has its own special storage area- the white board has a place for an eraser, as well as four non-still paint cups. The felt side has a narrow, but long, mesh basket to hold your felt pieces and the chalkboard side has a tray to hold all the chalk. 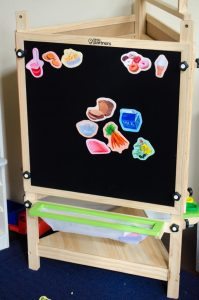 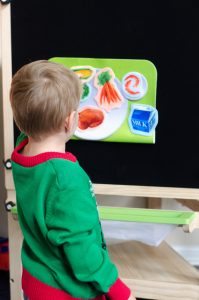 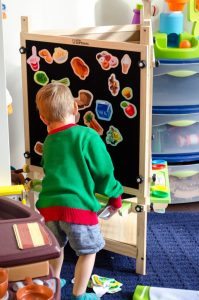 I got Jonathan a set of felt cut outs to play with on the felt side of the board. We use it to do a sort of “What’s for dinner today?” kind of thing. It has been great for teaching him different foods that he didn’t already know, but it does constantly remind him of the existence of one of his favorite foods- doughnuts.

This one wasn’t quite as easy to put together, but it was definitely doable. Even with two hangers on.

Both of these products would be fabulous Christmas presents for the kids (and parents) in your life. After all, the best present is time spent together- and the Learning Tower helps you do just that.