I think I deserve a pat on the back.

I am finally  caught on on Bon Appetit magazines. I realized the other day that my magazine rack overfloweth, partially due to the fact that I had magazines from FEBRUARY in there. So I’ve been trying to get through 1 or 2 in the morning, if I can manage to get a few minutes to myself before the Typhoon awakens.

Thank God that I did, because I ran across their recipe for what they have deemed “The Perfect Fish Taco.” I was excited, because there is no shortage of bags of fresh frozen snapper in my freezer. I’ve done fish tacos before, but since I’ve never had them out anywhere, I’m not exactly sure what they should or could taste like.

True to form, the day was chaotic. The Typhoon learned to open doors, a feat that I already rue. I was unloading groceries, he was playing with the canned goods in the pantry. All of a sudden, I went to put something away and noticed that it was…quiet.

It’s never quiet here anymore. Dave told me last night that the hospital is officially quieter than our house. I’m not surprised.

I went over to the pantry to find out what he was doing. He wasn’t there. The door to the open garage was ajar. And there was the little Typhoon himself, running down the driveway.

I, of course, had a heart attack and ran and grabbed him. It was my first moment as a parent of yelling because I was so relieved he was okay while simultaneously thinking of all the terrible things that could have happened. It was not a fun moment for either of us.

I should also mention that this all transpired in under 40 seconds. Kid is so freaking fast now. Sigh.

The whole day just kind of felt like that. By the end of the day, I was in need of something called “The Perfect Fish Taco.” True to form, I forgot to get cilantro at the grocery store, and didn’t feel like sourcing out jicama (what?!), so this has been tweaked. We loved it though! Dave took two bites and was raving about the tang of the slaw.

I scaled this recipe by half, just FYI. This looks long, but it’s not. Probably the fastest dinner I made all week. 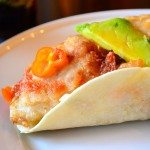 Note: if you have a deep fry thermometer, your oil temperature should be 350. I have one, but didn’t feel like digging it out, so I just drizzled a little batter in there to make sure the oil was hot, but wasn’t TOO hot, where it would quickly burn the batter.

Note 2: The original slaw recipe called for 1/2 bunch cilantro, with the stems being pureed with the lime juice, zest, and sour cream. For what its worth, if you want to try it the “not forgetting things at the grocery store” route!