I’m thoroughly impressed with myself. I managed to get through four months of Bon Appetit and Food & Wine magazines that I had been back logged on. I found this recipe while I was reading, and wanted to try it.

The only reason that I considered this is because I had a brisket that was big enough for two dinners. I have to say, it was excellent. I altered it slightly from the original, mainly due to the fact that I didn’t initially notice that it needed to be started the day before. C’est la vie, move on and make no apologies. After eating it, I wasn’t too torn up about my modifications.

Speaking of things not going according to plan, here’s a laugh for the weary-minded. I would have served this with mashed potatoes rather than rice. Why didn’t I? Well, my dears, I had some made from a previous meal that I had heated up while the baby took his nap. He suddenly woke up absolutely hysterical, and forced me to abandon my potatoes on the coffee table and run upstairs. After getting him calmed down and back to sleep, no more than 5 minutes, I came back down to the living room, only to find that my rascal (jackass?) dachshund had pulled the entire bowl (complete with gravy) off the table, onto the carpet, and was gleefully devouring The. Entire. Bowl.

I was livid. I put the dog out and didn’t talk to him for several hours. He hid in the bathroom.

Anyway, give this a try. Although it’s not something that can be thrown together with 20 minus until dinner, it requires very little work for a big return on flavor and comes together with things that you likely already have. I’d say it has 10 minutes of actual, real prep work. The meat was wonderfully flavorful and tender-no knives required! 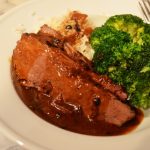 Previous Post: « Chicken Cacciatore
Next Post: “I Just Want To Be Perfect, Is That So Much To Ask?” »