Back to reality, unfortunately. I left for the airport completely zen and relaxed and ready to face the next two months. Then I arrived at the airport.

I thought the last travel trip back to Ohio was bad, but I had no idea what was coming for me this time. Let me just run down the sequence of events here:

Our bags did finally arrive at our doorstep Sunday afternoon, so I guess everything ended up okay. I have to say, J was a trooper all day. He was in a pretty good/tolerant mood and slept for half of the long flight. Poor guy was, and still is, wiped out. Too much fun in the sun!

Last post about Easter (“Good, since it was over two weeks ago now!”), but I think I have saved the best for last. This is a show-stopper, sure to impress anyone you make it for. It’s a perfect meal centerpiece, great for holidays or dinner parties. Everyone will be highly impressed with your culinary skills, but it will be our little secret as to how easy it was to throw together.

Fresh off the grill 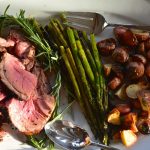 One of four times per year we use our wedding china…